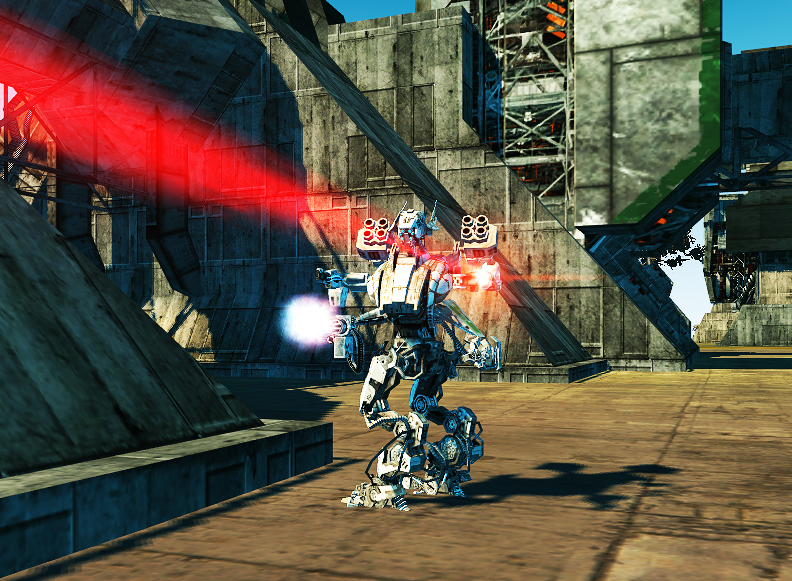 Salutations Agents!
It has been a long time coming but we are proud to finally present a whole new set of features, on top of some well-deserved tweaks, to the Beta Intrusion System.
Beware: there are many changes that are a part of the upcoming patch the the Open Perpetuum Server!  Read carefully here, and soon in the Patch Notes to be sure you understand these new exciting features and are not taken by surprise.

To better help you we have also made an informative video overview of the Beta Intrusion System – with new and old features described in detail.

For those not familiar, Intrusions are the broad category of features in Beta Outpost ownership and territory control on beta islands.  Please read the original game guide for more information on the vanilla system of SAPs (http://www.perpetuum-online.com/Help:Territorial_warfare)

Based on the public reddit feedback thread, there was much discussion about the pros and cons of the current SAP system. The conclusion was that it was very limited, but there were some features we’d like to keep. (https://www.reddit.com/r/OpenPerpetuum/comments/bz7vwh/discussion_saps_the_great_rethink/)

What we compiled was the following: SAPs create predictable, high-magnitude, low-frequency events that players can plan for – and this creates a nexus of PVP activity.  However, there are many hours throughout the day where nothing happens.  Spontaneous PVP is limited.  Roaming intruders, if scouted, are usually met with docking up instead of actively mounting a defense, because there is nothing out of the terminal at risk.  Furthermore, players that do not have times that overlap with SAP timers, or are not yet organized enough to go scan, record, and broadcast these SAP times, miss out entirely on Beta Outpost control.

Essentially, outside of SAPs, there is nothing to do that affects the ability of a player to influence control over their Outpost.  The more active a corp is on Beta, the more their Outpost stability should increase, and should be less dependent on getting lucky with the SAP time and their available times to play.  Thus we decided to add a layer of features on top of the existing SAP system that are high frequency, low magnitude – contrasting that of the SAPs.

By providing more events that are more available throughout the day, more players have opportunities to engage, offensively and defensively!  In addition, we made sure to provide features that anyone can engage with, any profession, bot, faction, play-style, activity level, and preference.

With that, we are happy to introduce you to what some have called Intrusions 3.0 – Open Perpetuum’s new Beta Outpost features! 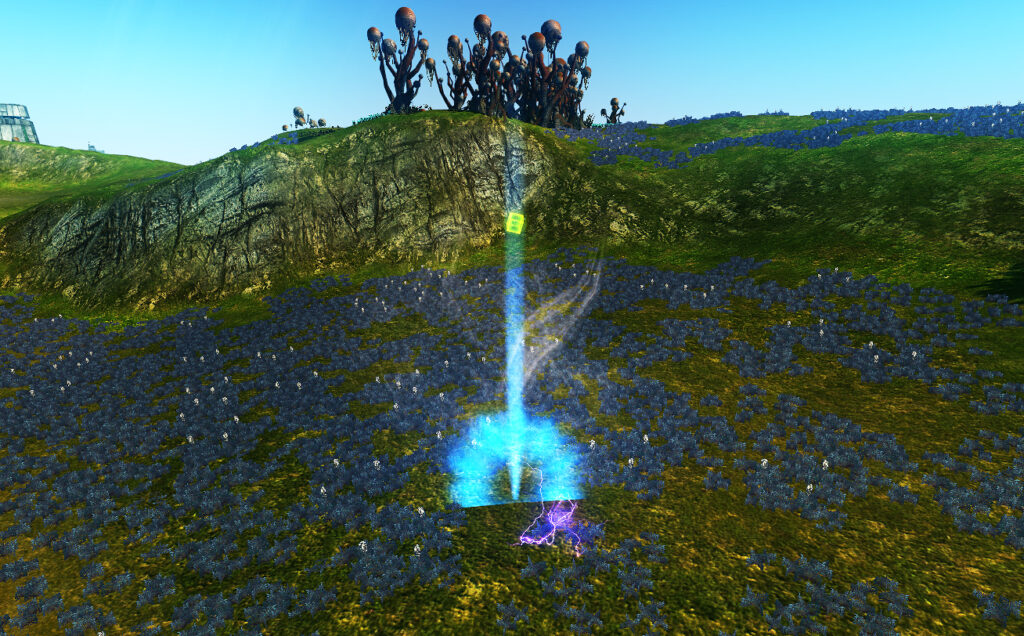 This was a natural addition after our roll out of the Relic system.  We have received nothing but a positive reception to the Relics, and we are so happy you enjoy them!  So we are going to add more that do more things!

Intrusion Relics are simply special Relics that spawn in a relative vicinity (1-5km) of a Beta Outpost.  Upon entering activation range of this relic (which will appear with a blue beam and green prism instead of red beam), you will get loot and the local Outpost will have their stability affected with the same rules as any SAP.

To that end, recall that the SAP relation rules are: owners add, allies and npc corps do 0, everyone else subtracts.
Each outpost will have at most 1 spawned at any time, and they will respawn at a rate of approximately every 4 hours, for 1 pt of stability each.

SAPs themselves are kind of lame.  Each has some activity of either, sitting in a circle, sitting with a module activated, shooting a static target, or drag and dropping items.  What if they shot back? This is where Outpost Guardians come in!

Each Outpost will now have 2 NPCs roaming around the outpost (at different ranges).  The Guardian will stay near the outpost in a predictably close area, whereas the Invader will roam the nearby countryside. The stability-affecting mechanics for these NPC’s are notably different.

Outpost Guardians, no matter who kills them, will always lower stability by 2 (except if the outpost is at 0)
Outpost Invaders will always raise stability for the owner by 2.
Each after being killed will respawn in approximately 6 hours.
This now creates a new circumstance for Beta dwellers to contend with, not only is the relic out there but right under their station they have a Guardian exposed to attack.

Roamers now have a target to shoot at, and owners have a reason to undock on beta between SAPs.

These are the major features ontop of the SAP system that we hope will entice and excite you to find new novel ways to engage in Beta PVP.

That isn’t all however!  We have necessary tweaks and Quality-of-life improvements to a LOT of the SAP system too!

Based on feedback and observation, it seems no one enjoys Specimen SAPs.  We previously reduced the item requirement load, published the table of requirements on discord (a once closely guarded SAP spreadsheet secret of the old alliances), nevertheless many players just walk away from Specimens despite these smaller changes.

We addressed the core of this feature with a keen eye on lowering a barrier of entry, without losing its unique “industrial” engagement. 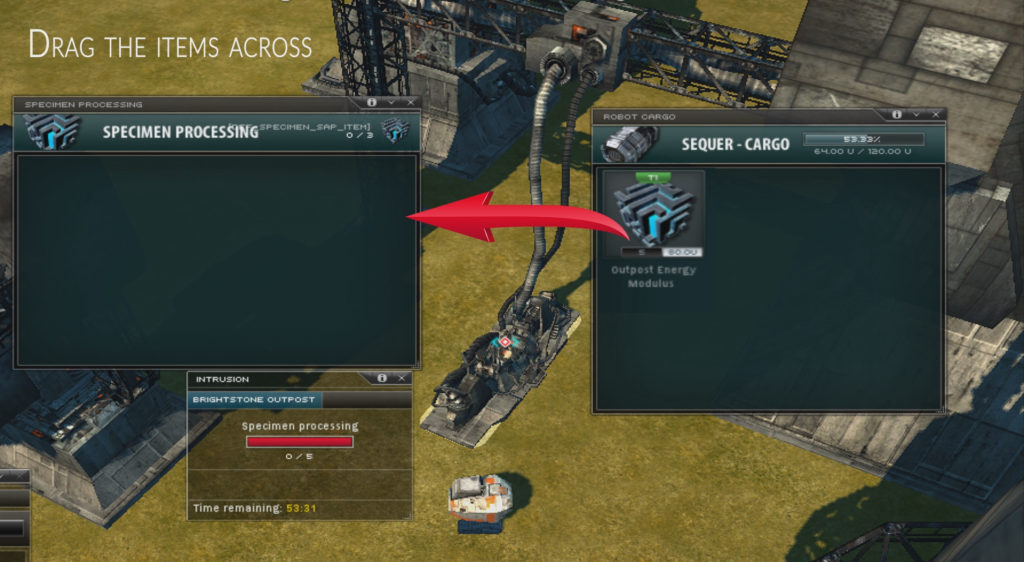 The goal is to make doing specimens more approachable, easier, more enticing, and equally risky for both new players and vets alike.  There are some interesting outcomes of the old system, where a player that was properly prepared with a Lithus could run the Specimen in 2-3 minutes (and not risk the Lithus, and use a transfer bot to take the PVP flag).  Whereas a less prepared player finds themselves running to get missing items, over most of the hour of the SAP, at all times exposed to reprisal.

Making the specimen require one type of item removes the guesswork, and the complexity of the problem out of the equation.  It makes preparation lean more on the industrial pilots of Nia which will certainly enjoy producing and selling materials or the finished product.  This also means that from large to small, each group will be risking themselves in roughly the same bots for the same amount of time. The ability to thwart specimen runners is then much like any other SAP: can the opposing force intervene before the SAP is completed, or at least catch the flagged SAP-er??  The haulers and the sizes of cargo required are much more affordable and accessible for more players too. The item size does also help reduce the ability for “transfer bots” to take the flagging in lieu of the hauler itself. The smallest bot to reasonably execute a Specimen is the Sequer. 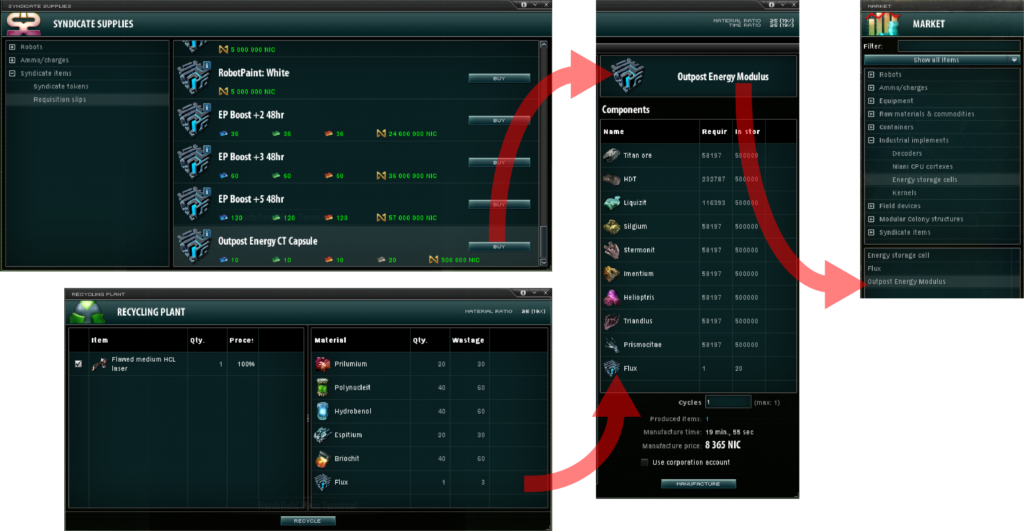 This new item can be found on the market under Industrial Implements > Energy Storage Cells > Outpost Energy Modulus.

This item is made of all raw materials that can be found on Alpha islands (and on Beta in higher quantities), plus a new item Flux!

Flux is found by Recycling T0 gear, which is only found via artifacting.   T0 gear has only really been used for recycling into production commodities, so this fits nicely into its role, and now ties into the Intrusion system.  Finally, artifacters have a role to play in Beta Warfare! (Or another lucrative market to exploit..)

SAP Masking was reduced from 100rf to 25rf – this means with some bot’s you can see a SAP if it is running from up to 5km away!  (Maybe more if you equip detectors…)

An Ally (2 corporations with mutual +10/+10 relations) can do each-others Intrusions for 0 negative effect – EXCEPT – for Outpost Guardians, which always lower stability!

Outposts maximum stability will now be 150.  The reason to make this change is because of all of the new ways stability can be compromised.  A motivated enemy can take down an outpost much faster. To buffer against that, we allow owners to gain more stability, giving them more runway before they get evicted.  With the new features, and the new threshold, this minimum time-to-evict is roughly the same to what it was with the original SAP parameters.
As a quality of life improvement: SAP loot, auras, and facility bonus points all max out at 100 still.  Going to 150 is just buffer for the owner to not worry about missing on max-quality loot, or losing their best aura, or facility bonuses.

ALL SAP Loot has been overhauled.  With vanilla, no loot drops below 20 stability, and it is basically garbage up until 100 stability.  Even at 100 stability, Active Hacks were the only ones that dropped anything of value. So of the loot that was not being used or left behind, we removed and replaced with a more predictable amount of loot people find more value in.

Each SAP’s loot now increases more linearly, and low-stability SAPs drop an extra batch of loot unique to those levels – to incentivize Outpost takeovers not just for ownership but also for loot!

As for drops, each SAP maintains their “theme”.  They are as follows:

For all SAPS at 0-50 exclusively will drop the above types, and the following: plasma, kernels, and small EP booster!

Inactivity finally has consequences (Yeah I’m talking to you!).

An outpost that has not had a SAP completed by friend or foe in the past 3 days, that outpost will begin the decay process: -5 stability points per day.  Note: this grace-period only resets with SAP completion, which does NOT include Intrusion Relics nor Outpost Guardian/Invaders.
At a stability threshold of 150, it will take 30 days to lose your outpost to decay alone.  Players would surely take an outpost faster than that, if one truly left their outpost for that long.  The goal of this feature is not to take down an Outpost, rather it should signal to other players that an Outpost is being neglected and might need a new owner!

With all of these new features coming to the server soon, get ready for a helluva fight out there!
Good luck Agents!

Your Guardian awaits you on Nia!