We released the EP Boost Items a couple patches ago as a means to address issues players found with reasonably progressing with EP to get higher level skills.  To some extent this is intentional, getting all the skills very quickly makes EP or spending time in the game less valuable.  EP activity rewards are an essential component to player activity we have observed.  However, there is also the handicap curve.  This curve was designed to assist newer players to catch up at a faster pace than normal to some sufficient level.  As the server population matures, this centroid of EP increases.  So as we release new skills, and time passes, this limit will be further extended where and when necessary.  We also heard about the “cliff” or “wall” that people feel like they hit at the end of the curve.  This is an effect of the curve itself, as it is a power-curve not linear.  The rate of slope change increases as it approaches the target falloff point.

To address all of these concerns we have the following solutions releasing with Patch 11: 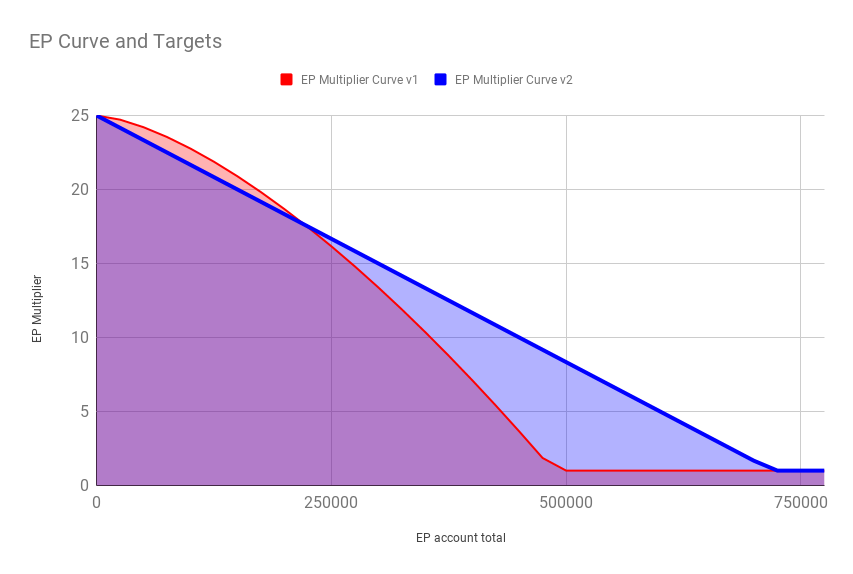 The graph above shows before and after Patch 11, what your EP curve is essentially modeled as.  Notice how the v1 curve (red) slopes down more rapidly as it approaches 500k, whereas the new curve (blue) as a linear function would not have this same effect.  Combined with the target falloff increase and the linear change, players can expect an increased amount of bonus for longer over the course of their “handicapped” period of EP earning.  If one took the area under each curve, the blue curve would be much greater for example.

This is why we have reddit!  The EP Boost Item was released at an experimental balance to see where players value their NIC to their EP earning potential.  As such, we now have a change to the pricing model of all EP Boost Items.

As of Patch 11 all EP Boost Items:

We hope that more players can access this content more affordably and that this pricing more closely matches more players’ valuation of EP to NIC with these items.  We want to provide an option to players that have reached the end of that curve, and want to maximize their EP earning potential.  These items serve that purpose, and now at a fraction of the cost!