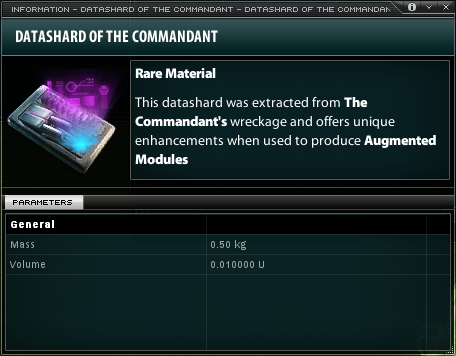 The Stronghold system is providing focused PVE-combat experiences with unique incentives that make it more engaging and more rewarding and different than typical open world PVE.  A wider view of the Stronghold system and this strategy will be detailed in a later blog, but today we will focus on the unique reward system for Strongholds: Augmented Modules.

Each Stronghold features a Boss – a challenging and unique NPC that drops loot unique to that NPC.  This special loot is called a “Datashard”.  These Datashards are required material to produce this new tier of “Augmented” modules.

Augmented Modules essentially are upgrades to T4 or T2 modules respectively, giving them a unique extra bonus of some type, that is unique to each Boss or Datashard type.  Generally the same balancing schema will be followed for each type.  A T4+ augmented module will have all T4 properties but also an extra bonus to some other unique attribute.  T2+ is a bit different because it is not globally superior, it leans more into the T2 side-grades of easier fitting, less mass, less accumulator usage in addition to having the same unique bonus, but at a lower level at lower Datashard cost.

Each boss’s Datashard can be used to make a number of modules with particular extra bonuses.  We are using these bonuses to create a “Theme” for each boss, so there is some logical consistency to the types of modules and bonuses that Boss may offer.  This can all be previewed ahead of time using the market and researching the item information.  The bonuses and modules that a Boss offers is not necessarily exclusive to a single boss.  Another Stronghold may yield Datashards that make the same module type but with a different bonus, or the same bonus on a different module type! 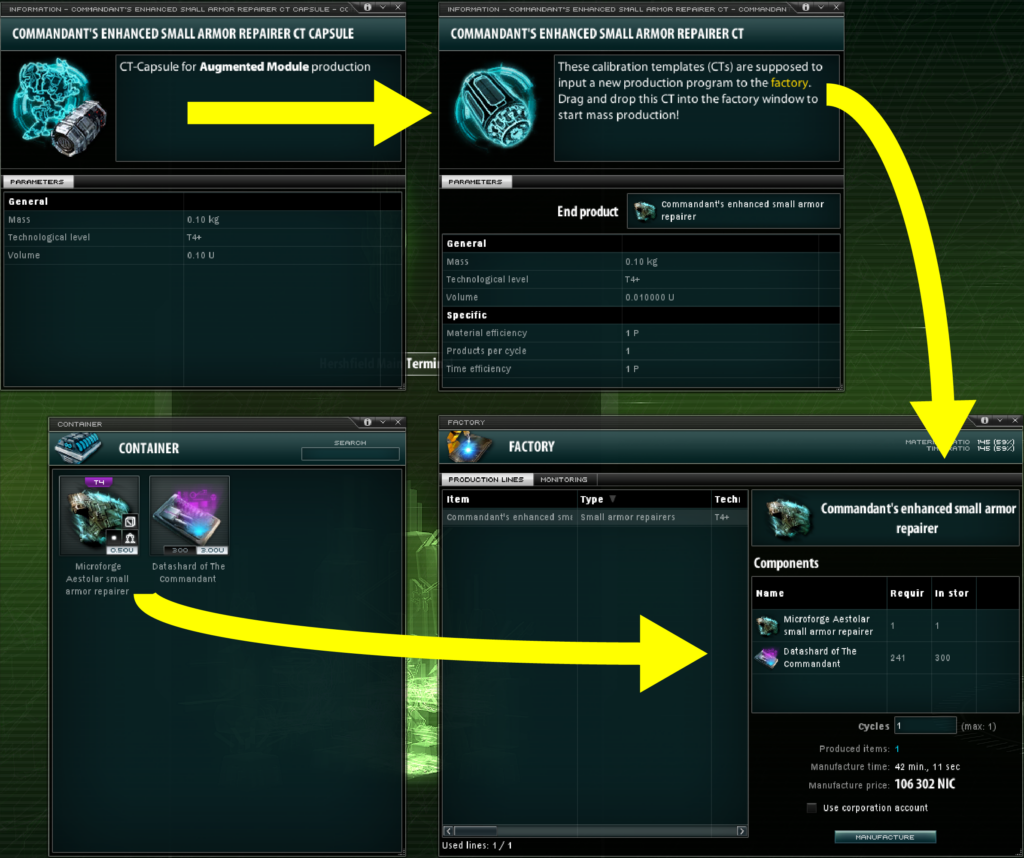 How to make an Augmented Module

The manufacturing cost of each is simple.  T4+ requires a T4 module and Datashards from the right Boss NPC.  T2+ requires a T2 module and fewer Datashards than the T4+ and this makes them, overall, a lot cheaper as a result.  The amounts will also vary with the module’s size, with small modules being cheaper than medium modules, etc. 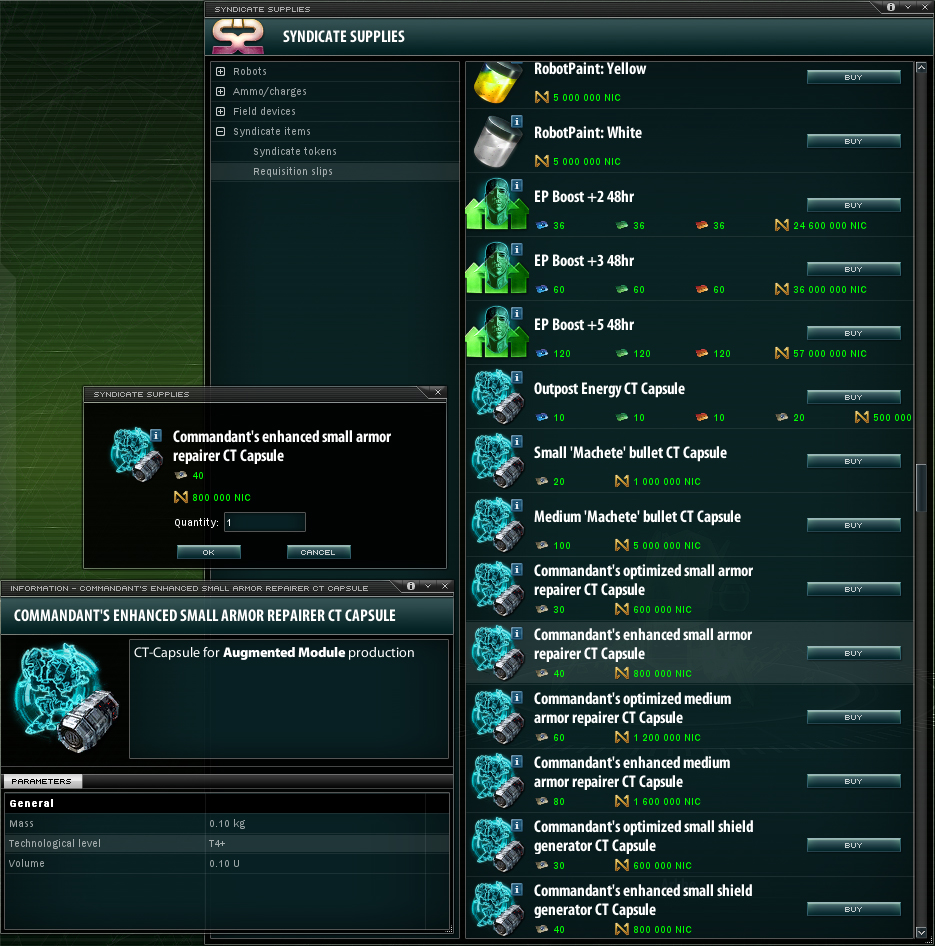 Find the CT Capsules at the Hershfield Syndicate Shop

The approach of providing different bonuses even for the same module and tech level opens up a very important opportunity for nearly endless content.  The Stronghold system will introduce an increasing number of Bosses and Datashards, each of which will then provide access to unique modules with this Augmented Module system.  This way each Boss and island will have a unique purpose.  You can choose which modules you want from a Boss, or which Strongholds you want to run.  Maybe you enjoy running one Stronghold instead of others, if so you can sell the shards and trade for others you prefer.  The choice is yours!

Hacking the loot system: dropping material instead of product

Each Datashard being used for a family of modules also solves a pernicious problem with getting desired loot to the right players.  The loot system does not, in its current form, allow for guaranteed loot groupings, or anything sophisticated beyond random chance on each unique item.  Note, the random chance is independent of all other chances!  This means it is possible to get no loot if all items are less than 100% probability. 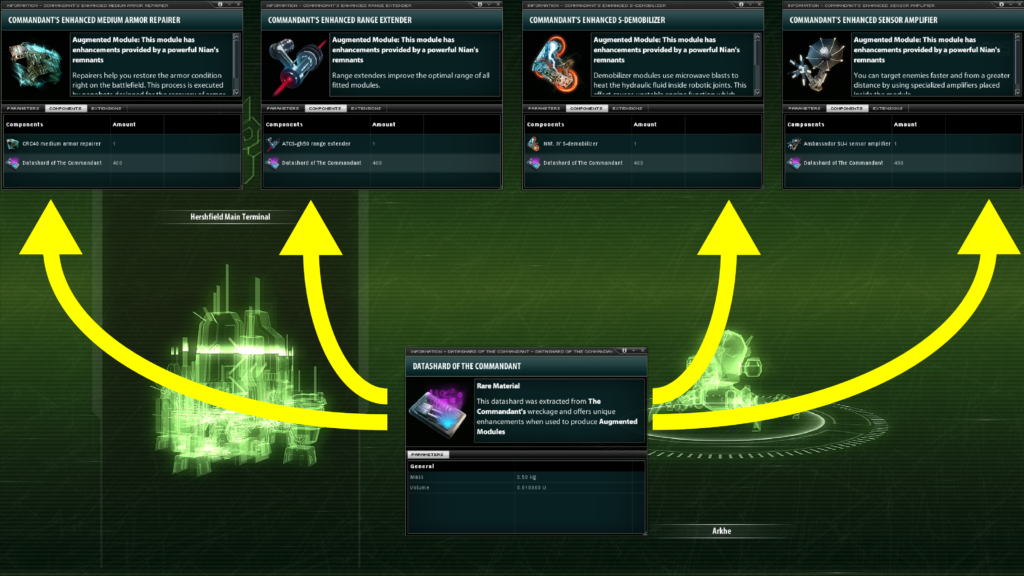 Shards from one can make many!

It was our desire to have Stronghold Bosses “drop” elite modules like this, but there is a tricky problem: you can’t drop fractional amounts of modules!  Further if one does drop, we can’t guarantee it is the one the player wants, if it was from a larger set of possibilities.

The solution was to have a guaranteed material drop and have the material be used for several unique modules.  This way, all participants get a “cut” of this module-material (via the loot-split feature) and players get to affirmatively choose which modules they want, instead of just getting whatever comes out of the loot container by random chance.

This has another useful side effect too.  It is our desire to make all T4+/T2+ across each Boss be roughly as powerful as others in its tech level.  But other Strongholds will spawn more frequently, and perhaps be designed for smaller groups or even solo players!  The Datashard drop-rate can be balanced with the boss respawn frequency such that a solo Stronghold that spawns in hours can be balanced to a weekly respawning group stronghold, and everything in between!

A new endgame loot system for a better tomorrow!

This blog explains some of the more technical design details of the approach and the motivations behind it.  We are all too familiar with the consequence of low spawn frequencies and highly-random dependent outcomes, loot boxes, and the rest.  We hope this system will distribute end-game loot more fairly, giving you the player more choice and decision making. We also think that this new loot approach opens the possibility of more interesting and creative content to come in the future.  The extra bonuses will also open up interesting metas around PVP or PVE or help some bots overcome some weaknesses that normal fitting can not address.  The ability of each Boss’s Datashard to become one of many modules will also make it an ideal commodity to sell to others who are unable/unwilling to run the same Strongholds – opening a new market for PVE mercenaries looking to score big on some high demand endgame loot.