For those of you new to Perpetuum you might be asking what “Gamma” is all about. In short, the Gamma island new world content is end-game, group-oriented, high risk vs reward territorial game play. Its crowning glory lies in the ability to take control of certain islands, terraform them, and build player-built structures and bases. Gamma bases are the pinnacle of a player-Corporation’s efforts, representing the ultimate reward for the combined efforts of many to conquer the untamed wilds of the Gamma isles.  This content is not principally designed for solo or new players and there is no safe place on Gamma. To achieve the establishment of your own Gamma base will require lots of resources, nic, research and perseverance against an unforgiving environment. Other players may want your island, your stuff, and your life. Proceed with caution.

As you can appreciate, a lot of thought has been devoted to Gamma and its total rebalancing. This started from day 1 of the project and has continued up with the introduction of The Sentinel Island as a test for siege mechanics and the introduction of the Destroyer Class. The latter being the much needed and absent Siege platform from the original Perpetuum. That said, a well designed and defended base is still a formidable obstacle and Destroyers are a costly investment, so proceed at your own risk. We hope we have the balance right for now. All Gamma islands should be considered hostile and safety is not guaranteed. However, there are treasures and adventure for all those willing to risk.

We are not just opening up the old gamma islands as many of you remember them. The whole Gamma world has been redesigned. All islands and the world layout was designed from the ground up, all from scratch, and greatly expanded to a total of 40 new islands. All the rules, tactics, metas, have been reconsidered to make Gamma fun, fair, scalable, and a rich meaningful experience.  We are enhancing how Gammas extend the game world and have purpose beyond the novelty of Gamma itself, where real incentives will drive conflict and player ambitions.  There will be new NPC’s, Bosses, resources, and other challenges that await you.


Given the enormity of this undertaking, we will be releasing all the Gamma content in a phased rollout.  This will enable us to deliver things to the live server earlier and ensure all systems are operating smoothly.  40 islands is a lot.  More than the game has ever had in fact.

Phase One will introduce the islands onto the server.  At this time the islands will not be accessible but they will be visible on the map to all players until Phase Two, which will arrive in the next couple of weeks.

Phase Two will unlock the island teleports to players to begin to explore and engage with the PVE content on the islands. This also gives all players a chance to begin to gather resources and their comrades to prepare for the last phase.

Phase Three will unlock the Gamma Structures themselves.  All the items, research, will become available for players to begin their colonization efforts fighting Nians and each other for precious and strategically advantageous territory!

Why the Tiered islands? The rationale behind this is very simple. Each tier will have its own benefits and tradeoffs in terms of material, tech level support and map placement. We hope that this will encourage different players/Corporations to seek different islands appropriate to their needs and ability. Driving conflict and providing ways for players to mitigate their risk in their choice of island.

The Gamma islands will have four tiers (T0, T1, T2, T3) including “connector” islands to the Beta islands. The Tier level of each island will determine what resources are found there, how plentiful they are, types of NPC threats and rewards, and what level of base can be built, if any.

The higher the tech the less local resource and the deeper into the Gamma world the islands will be.  Each will attract Corporations of different scales that can operate and live out of such islands and willing to put more at stake on their base.  The size of the Gamma world is such that it is possible that it may become a player-generated nexus of activity unto its own. 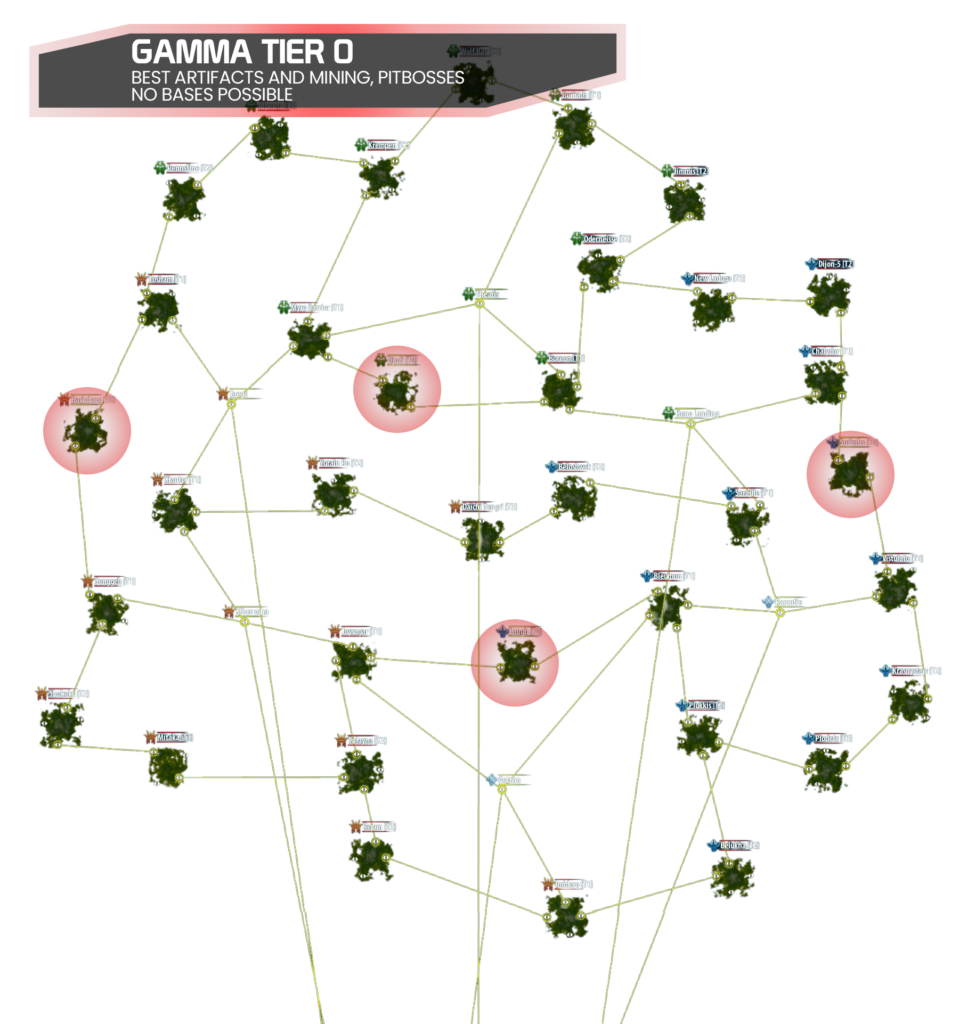 T0 islands are unique and cannot be terraformed or built on and therefore not be exclusively claimed by any player faction. They are also the most resource rich islands on Gamma featuring the only sources of Epriton and Flux Ore among the Gamma islands. Hostile Nians on this tier are the most lucrative to hunt, featuring faction specific bosses. 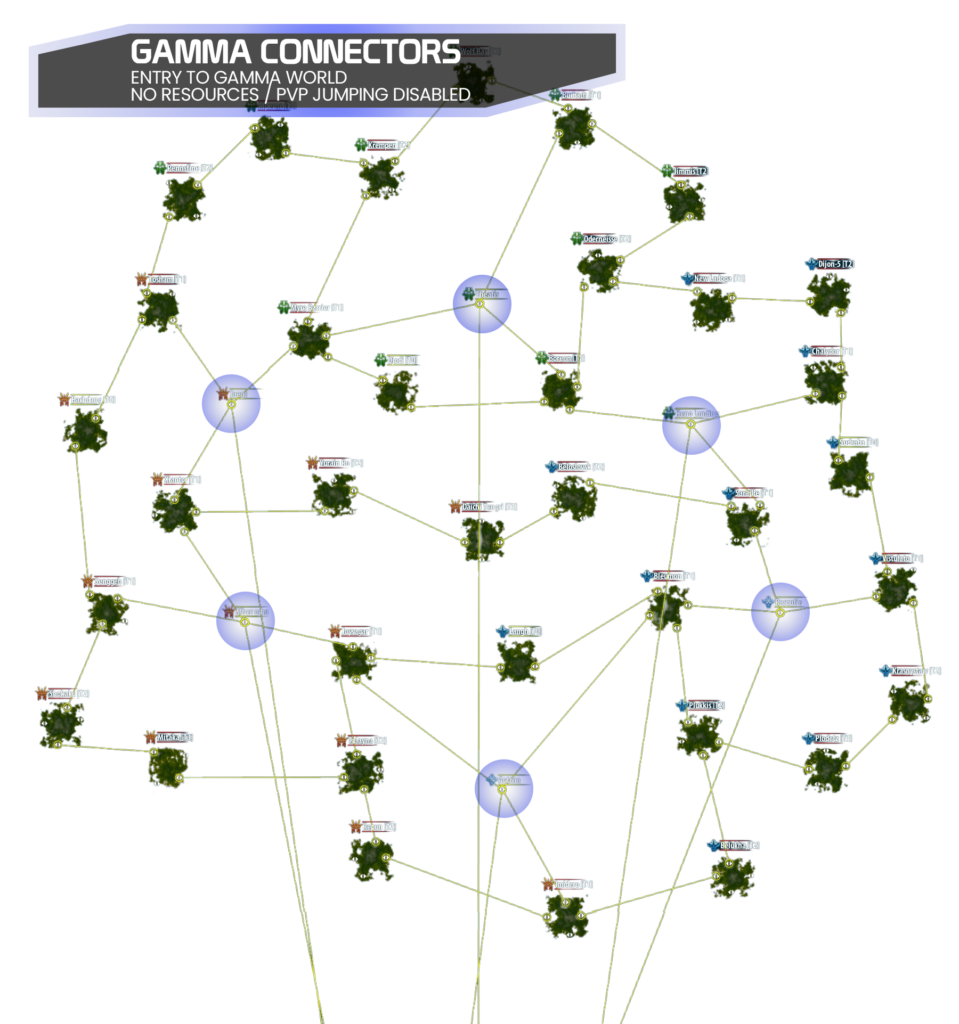 Connector islands – The Gamma islands are accessed only through these “Connector” islands which connect each to their own beta island. They are non-terraformable. 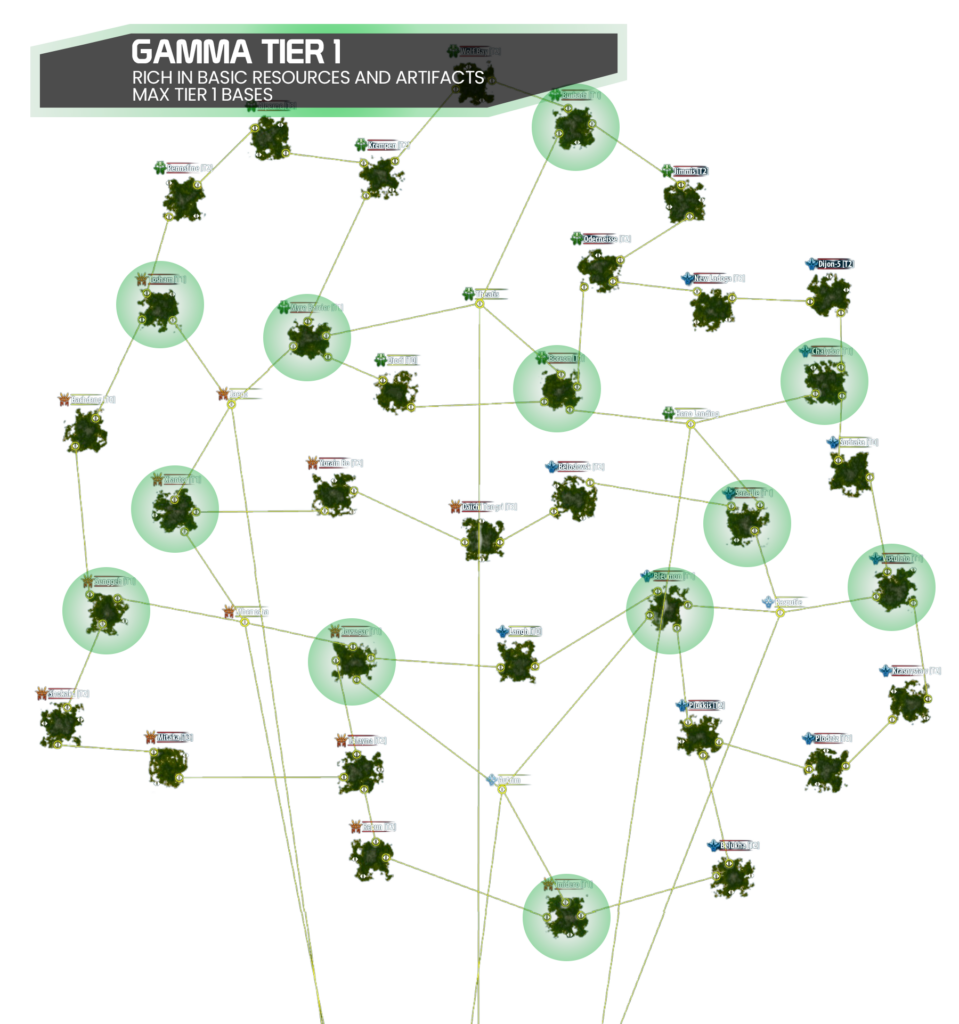 T1 (and up) Gamma islands are terraformable and allow player structures to be built there.  The most important aspect of the Tier system is that the level of the base is limited to the tech level allowed on that island. T1 islands therefore will only be allowed to have T1 structures built on them. But don’t let that deter you, because as a tradeoff, T1 island’s are by far the most Colixium rich islands, and the most plentiful in the gamma world. 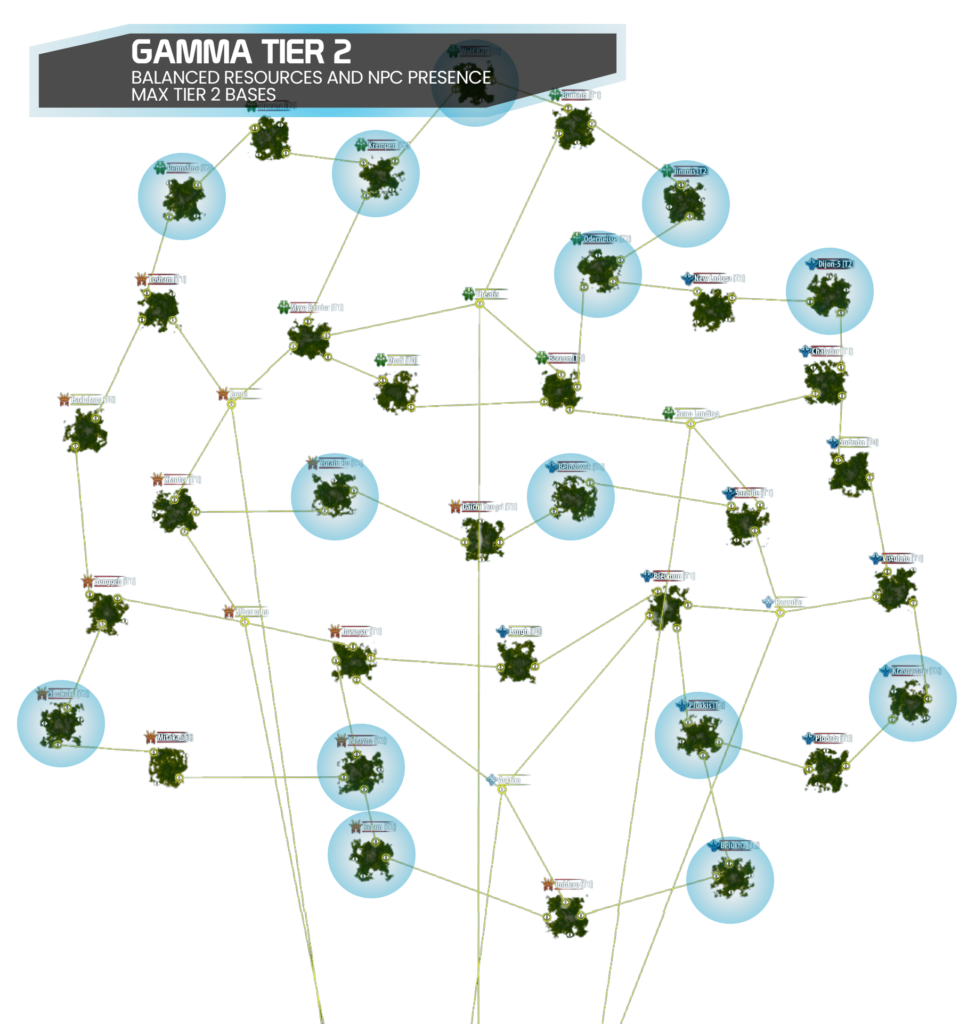 T2 islands, as you can imagine, are the stepping stones between T1 and T3.  It features more local resources than a T3 but less than T1.  There are significantly more T2 islands than T3 available, which offers opportunities for smaller entities to avoid the ire of greater alliances warring over the precious few T3.  The logistical depth of T2’s into the Gamma world also make them less isolated than the T3’s. 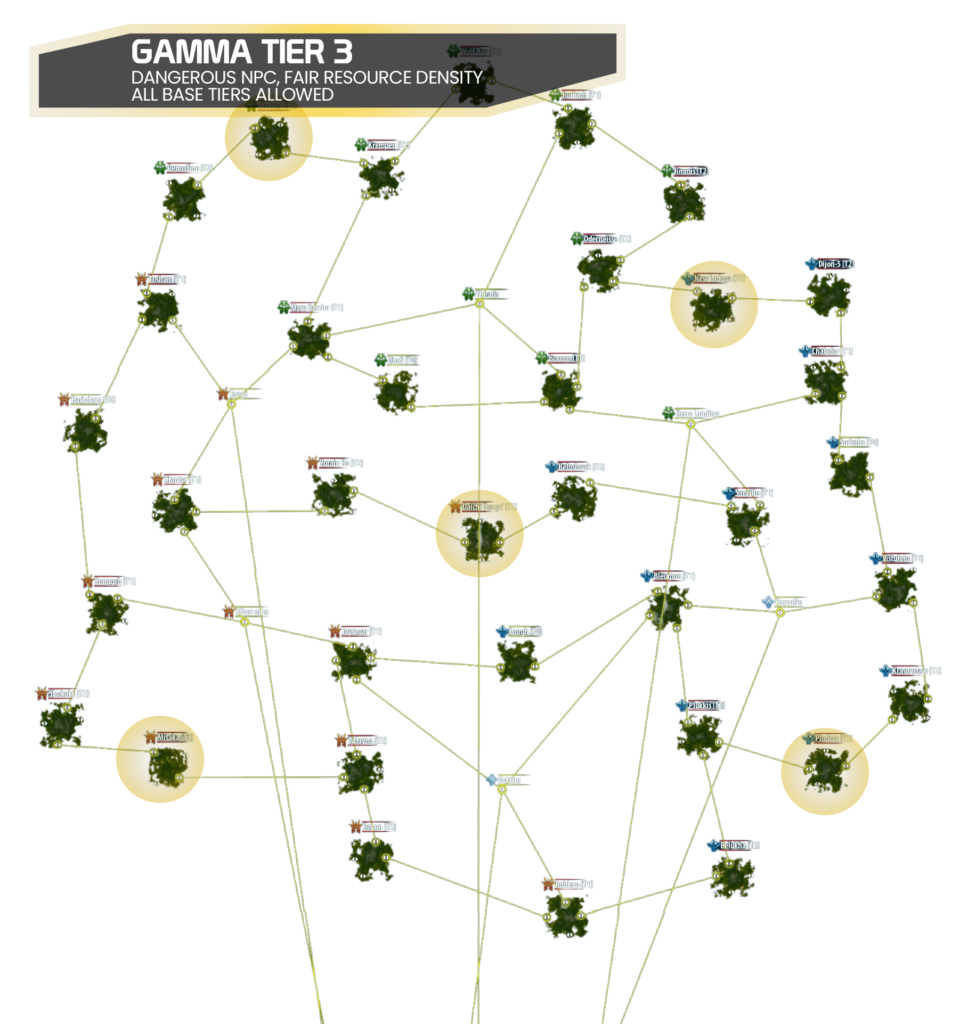 T3 islands feature the ultimate Gamma base technology.  You will have the highest tech facilities, the best industrial manufacturing, the most bandwidth to support said facilities, and the best defenses.  It is also the rarest terraformable/buildable island set deepest into the gamma world.  Only the largest and most ambitious Corporations will manage such a feat.

This is only the first look at some of the major new features, changes, and balances introduced in with the re-introduction of Gamma.  There will be more blogs and posts about the features landing in the next phases coming soon!

What’s on the schedule?

Here is a quick schedule of things happening over the next couple of months!

With the r/MMORPG Spotlight will likely bring some new players to the game to try it out.  To help them with their first steps in Perpetuum, we will be hosting a “New Player Welcome Event” as a way to show what a kind, helpful community of players that they are about to join.

Participation is simple!  Join the discord and login to the game.  At the times posted, join the OP-General voice channel and answer questions from new players.  Join them in-game and show them the ropes.  We all know how complex Perpetuum is.  Helping a player through their first steps means the world to them, and to us.  We hope if you have the time to join you may find it rewarding as we do.

Here is our initial schedule of New Player Welcome events:

The best part about working on this project in my opinion is not experiencing the improvements to the game myself, but experiencing it through the joy of others.  I hope you will find this joy too.