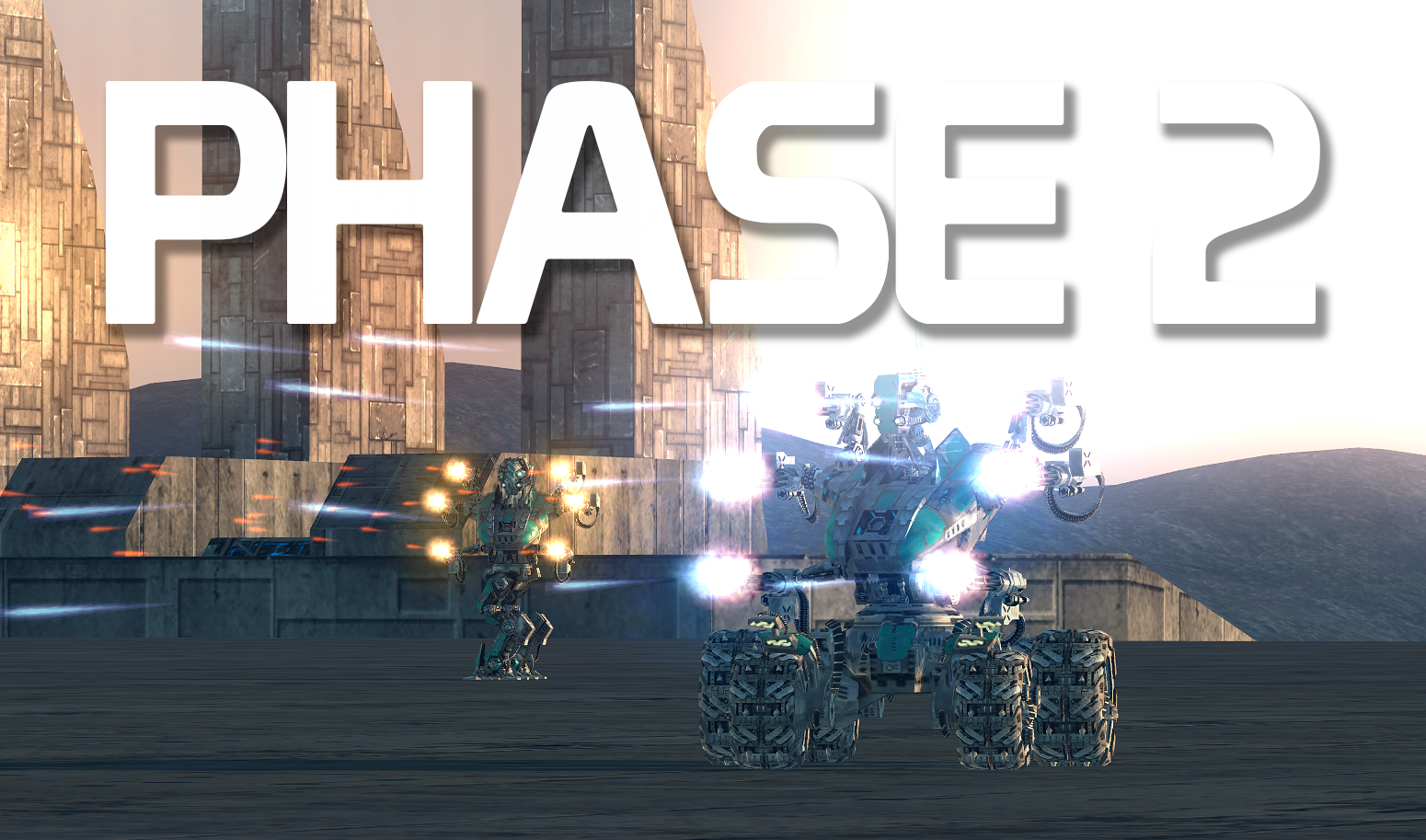 Following up on Gamma Phase 1, the second phase of gamma rollout will be focusing on the PVE aspect of the gamma world with the aim to make it more exciting and create content for most levels of play. Whether you’re a new player finding artifacts, or want to team up with friends for the latest challenges, the dangerous gamma frontier will have something for you.

There’s a lot to cover in detail so here’s TL;DR:

I know you probably want to hear about T4+ and how good they are, but first I’d like to start with my favorite feature, Minibosses. They are inheriting their basic concept from guys like One-Eyed Josef but scaling it up for Gamma. The challenge of the boss itself, and the reinforcements it received were probably the highlights of our testing experience and I’d highly recommend you find a friend and try them out.

You can find them on T0 of their faction a bit off the beaten track, at roughly equal distance from both teleports. Challenge and reward has been calibrated for a group of 6-8 bots and are well worth the trip. This content has also been designed to be something you can try every day and not kept behind a long respawn timer

Speaking of datashards, let’s take a deeper look. We have 4 new types of them incoming, one for each major faction. You can expect to find them in the wreckage of regular bots, and increasingly bigger amounts in challenging NPCs like observers, couriers (another new NPC group) and bosses.  They are used for all-new T4+ guns that are a direct upgrade to regular T4, improving the damage they deal. The damage for the T4+ guns have been set based on our hypothetical dps between a T4 and a “T5” gun, following the existing power curve from T1 to T4.This results in a half-step of power, while leaving the door open for possible future weapon design. 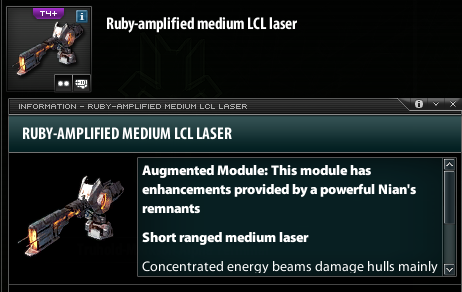 We are also adding new mining lasers that will use a lower amount of all 4 types of shards and feature reduced cycle times for extra-quick mining as well as increased range for QoL. This will also allow us to add more faction related T4+ items in the future, without needing to create an entire new island and boss mechanics each time.

If you’re not yet strong enough to go against bosses, the new design philosophy of regular NPCs will still be something worth exploring . With our new philosophy, we want to pull away from low-engagement static farming that’s been a staple of the game up until this point. Now all the NPCs on gamma are roaming swarms. We have had roaming red NPCs in the past, but we feel they missed the mark for enjoyable content. Although roaming NPCs offer unique and exciting engagements, there needs to be purpose behind activities. The overall reward compared to the time to find and fight these NPCs took the idea of farming them for profit almost entirely off the table.

To make it right, we custom built 300+ new NPCs, all with new names, fittings, and most importantly: loot. You can expect all the loot from your typical NPC to multiply by at least tenfold. This will allow you to monumentally increase your assets and wallet, that is, if you can accept the risk.

That’s the name of the game on Gamma, Risk vs Reward. T0 islands offer no ability to safe up on the island itself but in return, provides by far the richest rewards of any island. It uniquely offers Flux and Epriton mining, as well as the only wild-growing Noralgis on Gamma. You can also find big and juicy Scarab caravans, bosses and more shards than on any other island.

Phase 2 Gamma will not add the bases just yet. But to help you establish a foothold and start living on Gamma, we’re pushing Staging bases in the patch. You can find capsules and T0 construction blocks you’ll need for them seeded on Hershfield market. Each base is deployable inside the redzone on the islands, and will live for 7 days after deployment. Don’t worry, you don’t need to remember when you built the base. You will receive an in-game mail with exact date once the timer starts ticking, and the expiration time will also be featured as Terminal Chat MOTD.

Please note, staging bases can NOT be deconstructed or moved. The bases will have a single emergency cycle, but do not possess a lot of hit points and you cannot attach any buildings or turrets to them, and neither can you build walls around them. Their main goal is providing shelter in a remote area, and assisting in territorial content. 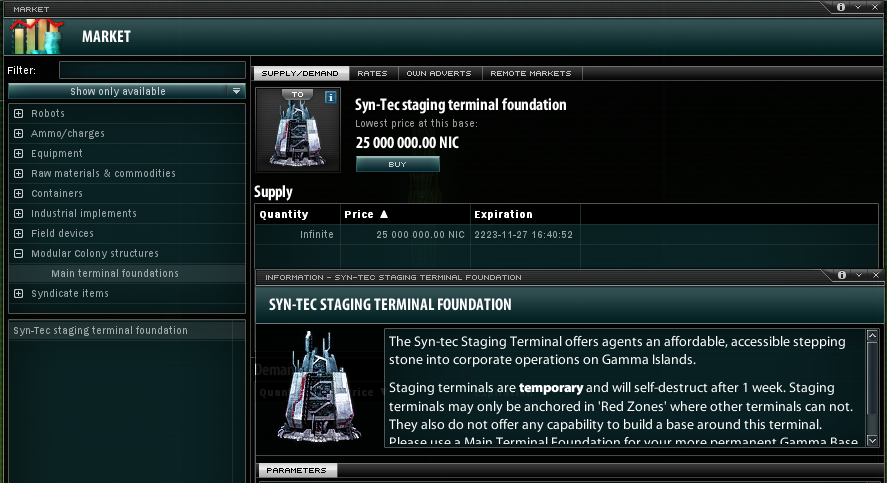 The bases are also designed for providing an outlet for solo and small group gameplay on Gamma. And some of the PVE content was created to primarily cater to that group, namely Couriers!

They are small and dangerous NPC bots that will utilize high speed and masking to get around undetected and complete their own missions on the island carrying high-value goods ignoring everything else unless threatened. Catching them in the act will require being lucky, fast and crafty, and the rewards are quite substantial, including datashards non-native to the island. 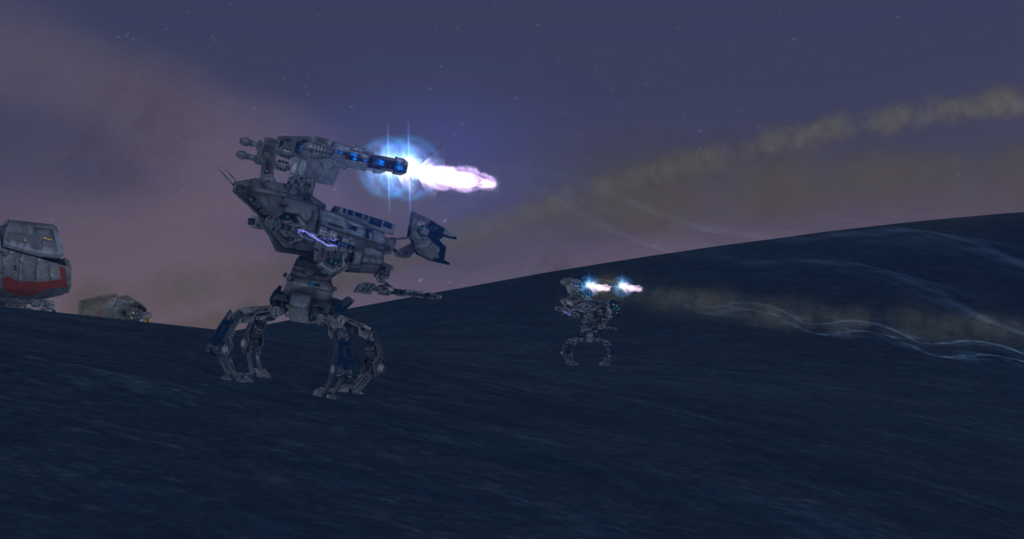 On the opposite side, we have 4 Pitbosses, each residing in the center of their faction T0 island. They are utilizing Destroyer chassis, so you can expect a LOT of damage coming from one of those, and you can expect them to have significant reinforcements. They can also withstand a lot of punishment, and everything said before about new NPC philosophy applies to them as well. Don’t be expecting to break Hydra’s shield with a single long-range Seth.

Each Pitboss will also use a reworked Interference Emitter feature, so keep your tactics board clean when you engage them for the first time. They will appear every 5 days in the center of their factions’ T0.

As a preparation for the Phase 3, we’re offering a sneak peak into the new research tree. Some changes are still on the table, but you can start preparing your kernel supplies. You might notice a few new items in there as well. None of the building stats are final. 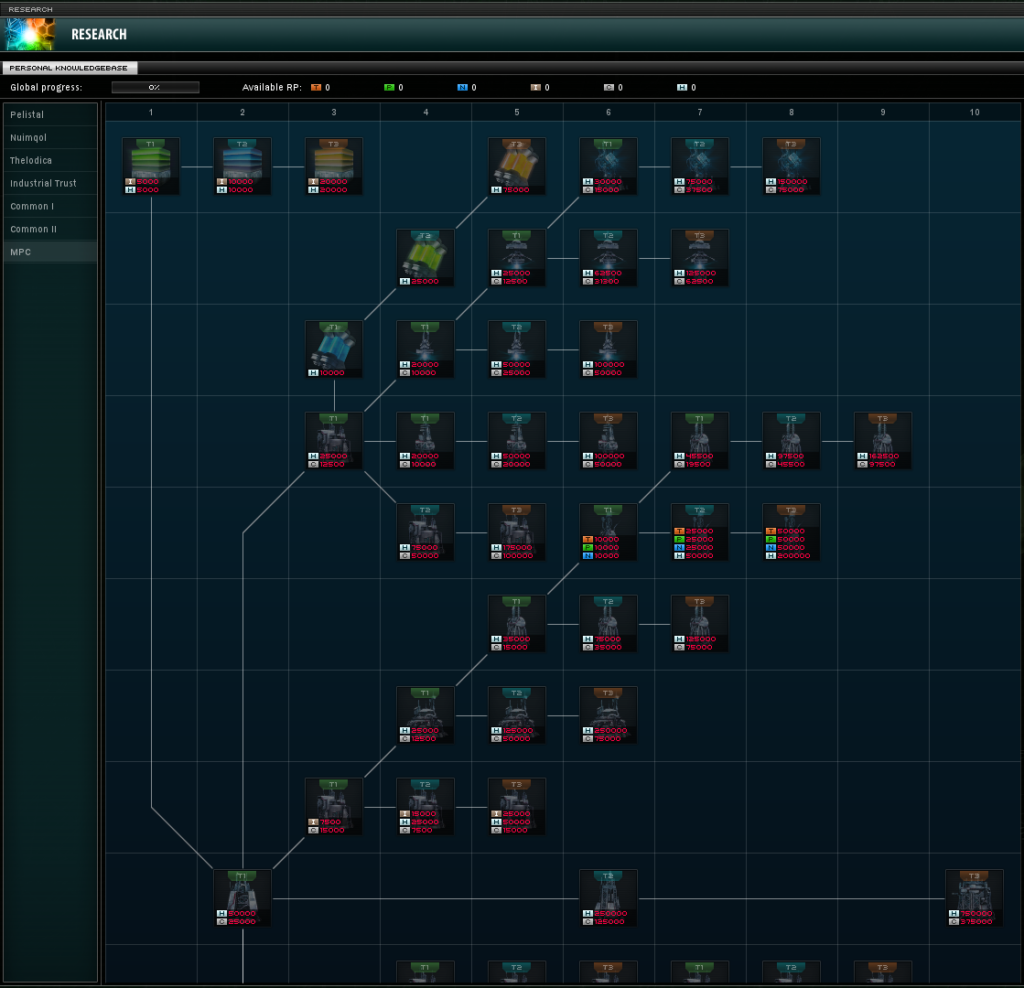 And to wrap it up, here’s a lot of smaller things/features that will be added in P27 aka Gamma Phase 2: